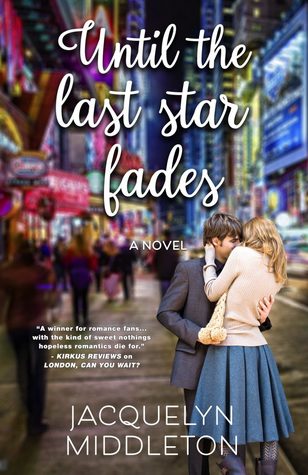 Touching, heartfelt and passionate, UNTIL THE LAST STAR FADES blurs the line between slow-burn romance and women’s fiction, and is a must-read for hopeful romantics, devoted daughters, and the moms they cherish.

COULD YOU BE THE ONE WHO CHANGES EVERYTHING?

In her senior year at NYU, Riley Hope appears to be on top of the world. With a loving mother who makes Lorelai Gilmore look like a parenting slacker, ride-or-die friends, and a long-time boyfriend destined for the National Hockey League, she puts on a smile for the world. But behind it, she’s drowning. Racked with fears for the future, she battles to stay afloat amid life in the shadows of a heartbreaking illness.

And then, Ben Fagan comes crashing into her life. Twenty-three-years-old, British, and alone in the Big Apple after a disastrous pilot season in LA, the struggling actor is looking for an escape: booze, mischief, sex—minimum commitment, maximum fun—anything to avoid returning across the pond.

As they form an unlikely bond, Riley keeps her reality from Ben so that he remains a happy refuge. But how long can she hold back the truth…and is Ben keeping his own secrets, too?

I loved the main characters so much and I thought Riley was so relatable. It was so refreshing to read about a character that deals with anxiety and depression, something I definitely relate to but rarely see represented in books.
I was so invested in the story and couldn’t put this book down, which doesn’t happen that often for me. I went out of my way to make time to read this book and it was definitely worth it. Jacquelyn Middleton never fails to write a book that I fall in love with but Until the Last Star Fades is easily one of the best books I’ve read this year.