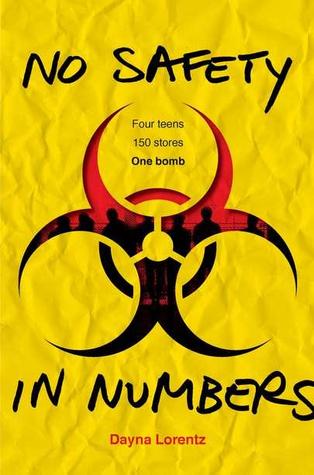 No Safety in Numbers by Dayna Lorentz

When a strange device is discovered in the air ducts of a busy suburban mall, the entire complex is suddenly locked down. No one can leave. No one knows what is going on.

At first, there’s the novelty of being stuck in a mega mall with free food and a gift certificate. But with each passing day, it becomes harder to ignore the dwindling supplies, inadequate information, and mounting panic.

Then people start getting sick.

Told from the point of view of two guys and two girls, this is a harrowing look at what can happen under the most desperate of circumstances, when regular people are faced with impossible choices. Some rise to the occasion. Some don’t.

I liked the idea of this book but overall, it just didn’t do it for me. I can’t really put my finger on what I didn’t like but I just couldn’t get into the story or become invested in the characters. I’m not a big fan of multiple perspective in books, especially more than two different characters. This book had four characters with their own chapters and I wasn’t into that. I never was able to focus on one character and become invested in them. There is diversity in the four main characters, Indian-American, black, white, and (if I remember correctly, but I could be wrong) Latino so if that’s something you’re looking for, you might be interested in this book.
But overall, this book just fell flat for me. I didn’t love it but I didn’t hate it, it’s stuck in the middle ground of somewhat forgettable.