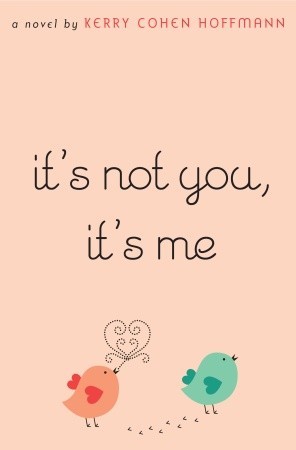 It’s Not You, It’s Me by Kerry Cohen

Zoe’s two best friends come up with a plan to help Zoe get what she thinks she wants. The plan: make Henry jealous.

Spanning thirty-one days in the cycle of a breakup, Kerry Cohen Hoffmann’s humorous and poignant novel depicts a girl whose single-minded focus on her ex-boyfriend has pulled her far from the person she most needs to win back—herself.

I had accidentally bought this book a while ago and I really wasn’t interested in it. I had it for about a year before I picked it up and I kind of wish I had just left it on my shelf.
The main character of this book, Zoë, is awful. She’s completely insane. The things she does after her breakup are crazy and she’s so stupid. Like, that boy needed to get a restraining order. I don’t understand if the things she did were meant to be funny or she was just a very poorly written character. I wish I could find a redeeming quality about It’s Not You, It’s Me, but I really can’t think of one.

There was an error retrieving images from Instagram. An attempt will be remade in a few minutes.