Hey guys, I know it’s been a while but my computer broke and I just got it back right before July 4th and then the crazy 4th of July weekend came and so I’m behind on A LOT of reviews and a Wrap Up/TBR post.  Which is to come probably in a big bulk between tomorrow and Tuesday. 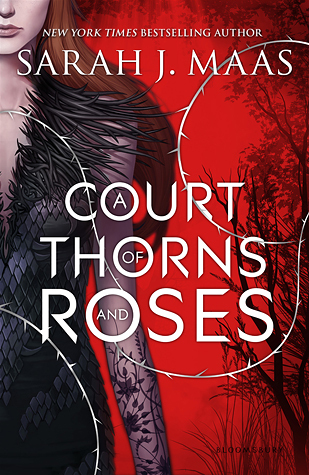 A Court of Thorns and Roses by Sarah J Maas
Published: May 5th 2015

When nineteen-year-old huntress Feyre kills a wolf in the woods, a beast-like creature arrives to demand retribution for it. Dragged to a treacherous magical land she only knows about from legends, Feyre discovers that her captor is not an animal, but Tamlin—one of the lethal, immortal faeries who once ruled their world.

As she dwells on his estate, her feelings for Tamlin transform from icy hostility into a fiery passion that burns through every lie and warning she’s been told about the beautiful, dangerous world of the Fae. But an ancient, wicked shadow grows over the faerie lands, and Feyre must find a way to stop it . . . or doom Tamlin—and his world—forever.

So, as many know this was our June Readalong book and thanks for the people who joined us in this read along (we’re going to try another one for August, so if you have any books to suggest please let us know!) it was great and the forum discussions were really good!

This book, I think so far is my top book for 2015. I cannot believe the amazingness that was this book. It was just beautiful and the end was just so great I had to read it twice to make sure it was right. Sarah J Maas just blew me away with her writing the most though. I don’t think I’ve ever picked up a book and had so much trouble setting it down to do things like go to work or eat. I’ve never read one of her books before (which is why I picked up Throne of Glass this month) and I’m so glad that this was my first book read by her.

I honestly still cannot fathom how she wrote all her characters so perfectly. Even the evil ones! I hated Amarantha, but at the same time, I loved her for being so amazingly written! And her plot line and backstory was amazing. Which leads me to say, that Sarah J Maas had the plot and storyline on point from beginning to end. The whole thing was just…fluid and always in motion and there wasn’t one point where I was just like “okay let’s get moving”. Although I did hear a lot of people had trouble with the beginning of the book, but I didn’t.

The pace was fast and yet the whole book had so much detail but I still wanted more,I hope there’s more detail in the next books and I hope to see more courts and go deeper into characters. Tamlin was great and his relationships with all the characters were wonderful too. I hated Fayre’s family until Nesta really turned out to be a bad ass. Which I was so happy about. But her character writing was just so amazing. There was literally not one bad thing about this book.

Props to you Sarah J Maas. You literally took my breath away with this book (and so many feels).

2 thoughts on “Review : A Court of Thorns and Roses by Sarah J Maas”