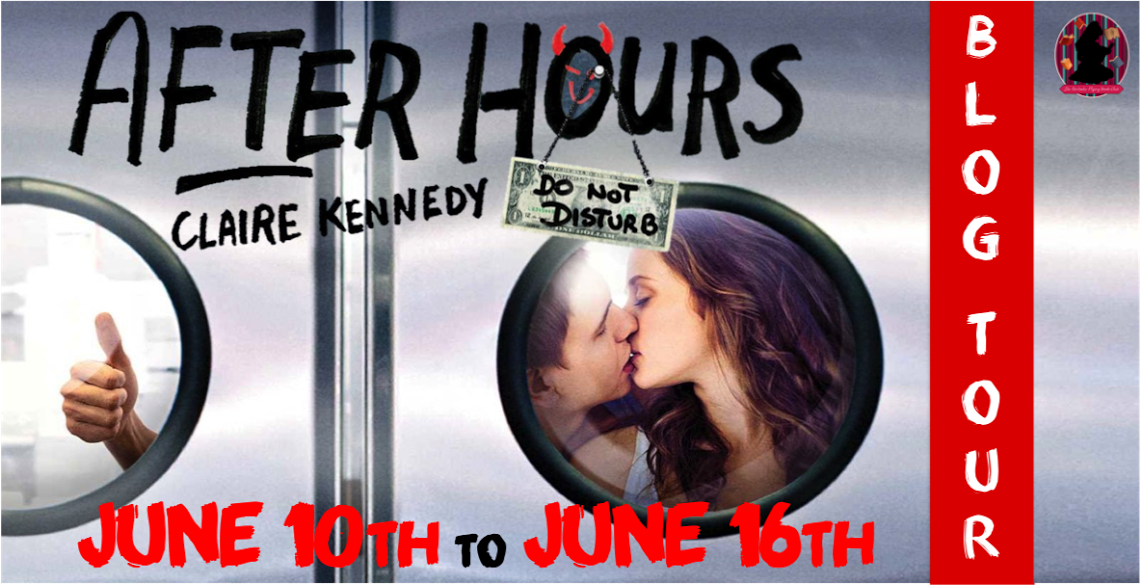 After Hours by Claire Kennedy

Isa, Xavi, Peter, and Finn know that a job at the high-end Waterside Cafe isn’t just about waiting tables. It’s about the gossip, the hook-ups, the after-hours parties and, most of all, it’s about Tips.
Tips–the high-stakes game based on dares. Whoever completes the most dares wins the collected money. A sum that could change a wasted summer into a Summer to Remember.
Isa is the new girl with an embarrassing secret, and as long as she stays on top of her game, she sees no reason why anyone could ever find out.
Xavi will do anything for the money…absolutely anything.
Peter, Xavi’s stepbrother, has been in love with her for years, and he thinks the game is the perfect time to confess his feelings.
Finn is in the game just for the thrill. He has enough tips coming in to keep him happy…even if those tips come with some conditions.
From seduction to stealing to threats, the dares are a complete free-for-all, and only the best can win.
The sophisticated Waterside Cafe is anything but classy behind the scenes…and things are about to get dirty.

I loved the concept of this book. From the game “Tips” to the idea of all the characters working at a diner, it was just such a fun book. And while I’m not a big fan of multiple perspectives in books, I really didn’t mind the four perspectives of After Hours. I felt like each perspective was relevant to the story. I really enjoyed the restaurant setting of this book. It was really original.
I really liked the pace of the of the story, I wasn’t ever really bored. If I had time, I could have read it in one sitting. I kind of wish I had because this is just one of those books that basically demand to be read all at once.
There was a lot of things really took me by surprise and I had a hard time trying to recover.  It reminded me a lot of Pretty Little Liars in some ways. Maybe some younger readers might not enjoy certain aspects and at times I felt like After Hours was an upper YA book, meant for older readers.
The end was kinda terrible. The story just stopped. Maybe my ARC copy was missing the last few chapters but I’m going to assume it wasn’t so I really didn’t like how the book just ended. I wish there was an epilogue.
Overall, I thought After Hours was a really fast paced read that got me out my almost-reading-slump. It may not be the right book for younger readers but who knows, maybe that’s just me. I can definitely see myself buying a copy of this book and rereading it in a year or two.

Follow the After Hours by Claire Kennedy Blog Tour and don’t miss anything! Click on the banner to see the tour schedule.

Claire Kennedy is a pen name for author Amanda K. Morgan. She is a freelance writer living in Nashville, TN. She covers events and works as a technical writer when she isn’t working on her YA novels.
At age 15, Amanda finished her first novel and continued to write in college, where she graduated Magna Cum Laude with a degree in English and an emphasis in Creative Writing.
Amanda is an avid volleyball player and spends time playing both indoors and out. When Amanda isn’t writing, she enjoys being entirely too busy and trying new things. Endeavors as of late include appearances in music videos, TV, and movies, rock climbing, and attending as many concerts and shows as her schedule allows.
Amanda headed up the Do The Write Thing for Nashville Project (with co-organizers/authors Victoria Schwab and Myra McEntire), which tapped some of the biggest authors, editors, and agents in the industry for an online auction that raised over $70,000 for Midsouth flood relief.
For more information on Amanda’s freelance or technical writing, contact her.

US ONLY
a Rafflecopter giveaway